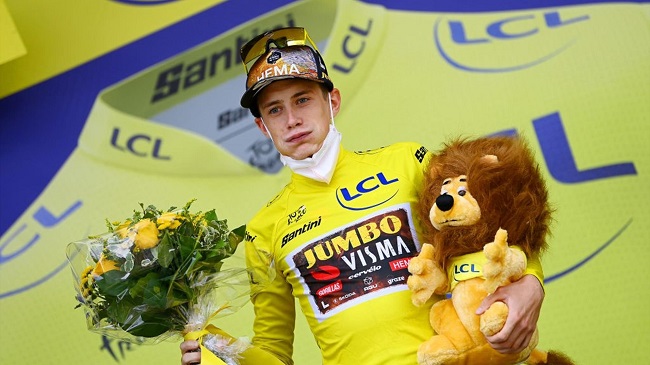 Over the course of three weeks of dramatic racing, Jonas Vingegaard went from being a brilliant rookie. To becoming a powerful leader in his own right, ultimately winning his first Tour de France crown on Sunday.

The former fish factory worker from Denmark defeated the incumbent champion Tadej Pogacar with impressive mountain climbing throughout the sport’s most prestigious race.

A year after finishing second to eventual winner Pogacar in his maiden Tour, the 25-year-old Vingegaard triumphed in the sweltering heat that engulfed France this month.

Jonas Vingegaard’s Jumbo-Visma have dominated this year’s Tour de France like few other teams have in recent memory.

When the peloton storms into the Champs Élysées early on Sunday evening, Wout van Aert, the cycling equivalent of the everyman, has a chance to win one more stage.

Even though he only gained a few seconds on twice Tour champion Tadej Pogacar of UAE Team Emirates in Saturday’s individual time trial. Vingegaard was able to relax enough to smile in surprise as he crossed the finish line.

Vingegaard, who almost wrecked on a curved turn in the final time trial of the 2022 Tour de France from Lacapelle-Marival to Rocamadour as Van Aert won another stage, eventually came out on top.

From the start in Copenhagen until the finish in Paris, the entire country has been riding on Jonas Vingegaard’s popularity. Sunday saw a steady influx of Danes, along with some impulsive Slovenians and stoic Welshmen.

After a second effort, Vingegaard rode into Paris on the backs of his reliable Jumbo-Visma squad. And defeated defending champion Tadej Pogacar and the peloton’s Mister Consistency, Geraint Thomas, to win the Tour de France.

Pogacar, the Slovenian prodigy at the helm of the high-spending UAE Emirates club, was the favourite to win consecutive yellow jerseys a year ago.

However, the tides have turned, and the fearless Dane and his mega-budget squad now appear unstoppable.

Prior to this season, Vingegaard filled in for Tom Dumoulin on the Jumbo-Visma team. Vingegaard had a breakthrough when he realised he could challenge for the overall title after passing Pogacar.

On the renowned Mont Ventoux climb, but his Slovenian rival was in peak form and virtually unbeatable.