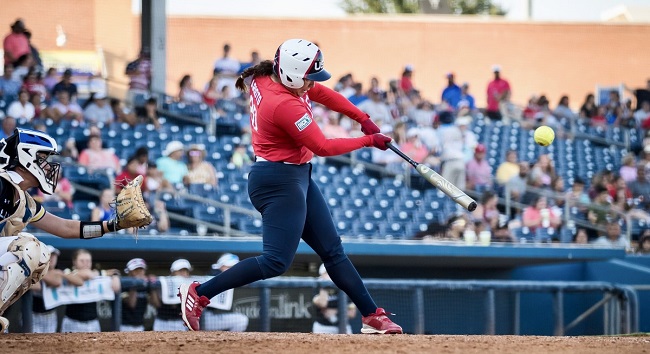 American softball pitcher and first baseman V. Arioto (born April 10, 1989) is a two-time Olympian and former collegiate All-American. She played for the California Golden Bears of the Pac-12 Conference as a pitcher and infielder.

V. Arioto has also been a part of the U.S. women’s national softball team since 2012, and she contributed to the team’s silver medal performance at the 2020 Summer Olympics.

The United States Women’s National Softball Team, led by V. Arioto. Lost to Japan 2-0 in the gold medal game on Tuesday morning at the 2020 Tokyo Olympics, and will return home with the silver medal.

Team USA started off the tournament undefeated, going 5-0 with a combined score of 9-2 heading into the gold medal game. V. Arioto recorded three hits, an RBI, and a run scored over Team USA’s six games. V. Arioto batted eighth on the lineup every game he played in.

V. Arioto, a Pleasanton native and Foothill High School alum, got her tournament-high point in the decisive match versus Japan in the first round. With the score still knotted at one, she blasted a run-scoring single to left, and the Americans went on to win in the ninth inning, 2-1.

The first run for the United States at these Olympic Games was scored by V. Arioto, who singled in the team’s opening game against Italy.

V. Arioto became the fourth Golden Bears softball player to win an Olympic medal. She was the tenth Golden Bear to compete in the Olympics.

After Gillian Boxx and Michele Granger won gold for the United States of America in 1996, Vicky Galindo won silver with the team in 2008. Before this year, softball had not been featured in the Olympics since 2008.

In addition to her 2012 Pac-12 Player of the Year accolade, V. Arioto was also named to the All-Pac-12 Second Team and All-Pac-12 First Team.

While she was a student at Foothill High School and the University of California, Berkeley from 2008-2010, 12. V. Arioto was named to the Third Team and twice to the First Team as an All-American by the National Fastpitch Coaches Association.

To date, she has spent a total of eight years as a member of the United States women’s national softball team, with which she won the World Cup of Softball in 2011.