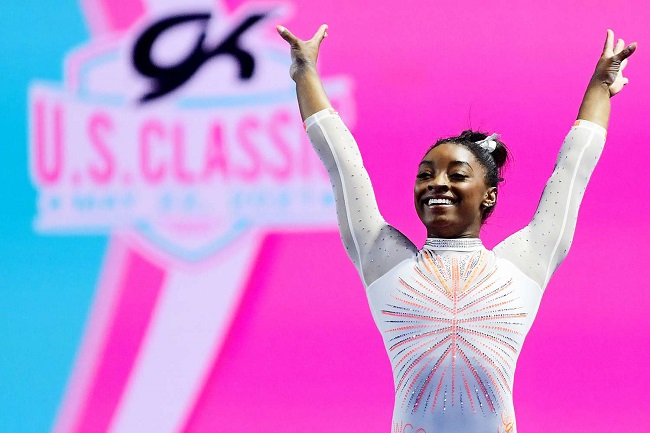 Simone Biles, winner of five Olympic gold medals, is no stranger to Twitter’s ability to irritate the gymnast. A new emoji depicting a tiny grey goat dressed in a sparkly orange leotard and performing the splits while wearing a gold medal was released on Thursday in honour of the record-breaking gymnast.

From July 24 through August 8, when the Tokyo Olympics conclude, an emoji depicting Biles, 24, will appear whenever the hashtags #SimoneBiles or #Simone are used.

Football players Tom Brady and Patrick Mahomes are among the other athletes to have their own GOAT emoji. The public has embraced the new image of the sportsman by tweeting their praises.

Since 2011, Simone Biles has been a top-level gymnast, and in 2016, she made her Olympic debut with the U.S. women’s gymnastics team in Rio de Janeiro.

Simone Biles won gold in the all-around, on the team, on the vault, and on the floor thanks to her superior technique, charisma, and talent. Simone Biles performed so well on the balance beam that she earned a bronze medal.

What Does a GOAT Mean for Simone Biles?

GOAT is an acronym for “Greatest Of All Time,” and many gymnastics fans believe that Simone Biles deserves that title.

If the aforementioned medals aren’t enough to convince you that she’s a big deal in the gymnastics world, perhaps having moves named after you will. Simone Biles is the first gymnast to accomplish four different moves, and each one of them is named after her.

If she does the Yurchenko double pike on the vault (which former Soviet gymnast Natalia Yurchenko never did in competition), she might even get a fifth named after her.

Simone Biles has made quite a stir on the internet despite not having even made her competition debut at Tokyo 2020 yet. This week, the five-time Olympic medalist in artistic gymnastics, who won four golds at Rio 2016, received a custom Twitter emblem.

The hashtags #SimoneBiles and #Simone bring up an image of a goat wearing a leotard and doing a split jump while wearing a gold medal around its neck. There have been talks that Simone Biles is the best gymnast of all time, and the goat is a tribute to that (G.O.A.T.).

While Simone Biles has avoided discussing her prominence in the sport, she has made fun references to it through her attire. Such as a goat imprinted with crystals on a training leotard she wore in 2019 or on competitive leotards and sandals she wore earlier this year.

The 24-year-old even received a blanket depicting a goat on her flight to Tokyo, which she announced to her social media followers under the handle @goldiethegoat.