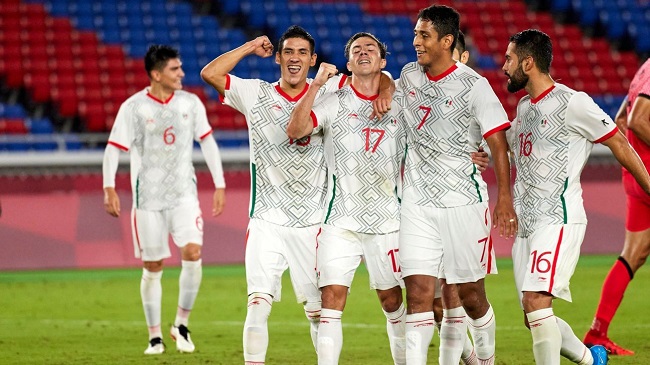 Mexico blew South Korea away with a goal-scoring clinic.

The Mexican assault put on a goal-scoring clinic Saturday night at the International Yokohama Stadium in Yokohama, Japan, as they cruised to a 6-3 victory over South Korea in a quarterfinal match of the 2020 Tokyo Olympics.

In the Semi-Finals, El Tricolor will Face the Eventual Champions, Brazil, on Tuesday.

As early as the 12th minute, Mexico took the lead when Henry Martin redirected a cross from Alexis Vega that had been nodded on by Luis Romo.

Lee Dong-gyeong of South Korea answered back in the 20th minute with a wonderful left-footed strike that knotted the score at one.

In the 29th minute, Mexico went up 2-1 thanks to another goal set up by the Vega-Romo connection. This time, Vega lofted a pass to Romo, and Romo scored with an amazing control and volley.

In the 39th minute, South Korea were awarded a penalties after a push on Uriel Antuna, which Sebastian Cordova easily converted to make the score 3-1.

Dong-gyeong gave South Korea hope with another left-footed strike in the 51st minute, narrowing the deficit to 3-2.

But Mexico were undaunted, as in the 54′ Martin scored following a Cordova free kick to put Mexico back up by two goals, 4-2.

Mexico’s offence was looking to seal the deal late, and Cordova delivered with a rocket into the upper left corner of the goal in the 63rd minute to make the score 5-2.

Eduardo Aguirre rounded off Mexico’s historic night with a right-footed drive in the 84th minute, extending their advantage to 6-2; South Korea would get one back in the 90th minute and finalise the score at 6-3 thanks to a goal by Hwang Ui-jo.