The Makuhari Messe in Mihama-ku hosted the men’s 60-kilogram Greco-Roman competition on August 1 and 2, 2021, during the 2020 Summer Olympics in Tokyo, Japan. 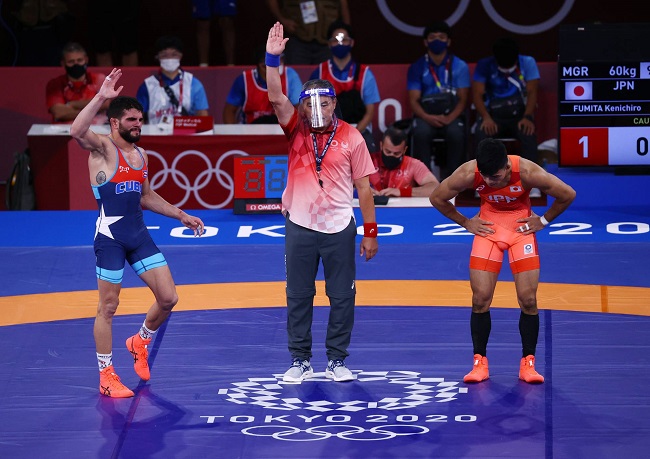 The 25-year-old Fumita lost to Orta Sanchez 5-1, preventing him from being the first Japanese Greco-Roman wrestler.

To win Olympic gold since Atsuji Miyahara in the men’s 52-kg category at the 1984 Los Angeles Games.

Despite Fumita’s loss, Japan extended a streak of 17 tournaments in which they won Olympic medals in men’s wrestling, including freestyle, dating back to the 1952 Helsinki Games.

This streak does not include the 1980 Moscow Olympics, which were boycotted by many countries, including Japan.

Japan has now placed in the top three in the Olympic Greco-Roman competition for a third consecutive Olympic cycle.

The main goal of Greco Roman wrestling, as with most amateur wrestling formats around the world.

Is to either pin both of your opponent’s shoulders to the mat to win the bout or earn more points at the end of a predetermined time frame to secure victory.

The standard time limit for each half of a match is three minutes, with a 30-second intermission in between.

To gain points in wrestling, competitors must successfully complete a takedown, which might be a hold, lock, throw, or other permitted manoeuvre.

There is a correlation between the degree of difficulty and the number of points awarded for a move or hold.

It is possible to score five points in a single move with a grand amplitude throw that leaves the opponent in danger position (their back is exposed to the mat for several seconds).

The majority of the technique consists of lifting up the opponent and flinging him to the ground while maintaining control over him.

Gaining the upper hand on an opponent from a defensive stance (a “reversal”) or when the other wrestler makes a rule violation that results in a caution both count as points.

There is a unique place in Olympic history for Greco Roman wrestling because it was one of the nine founding sports at the inaugural modern Olympic Games during the 1896 Summer Olympics in Athens.

In contrast to its more modern relative, freestyle wrestling, which first made its Olympic debut at Antwerp in 1920, the Greco Roman style of wrestling has been a mainstay at the Games since 1908.