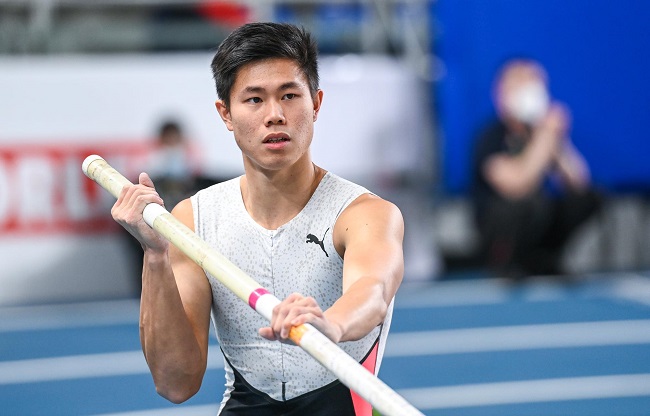 Learn More About EJ Obiena, Who Ranks 5th in the World in the Pole Vault

After placing second at the 2021 Paris Diamond League on August 28, 2021, with a personal best of 5.91 metres, Filipino pole vaulter EJ Obiena climbed to fifth in the world.

Manileo, who is only 25 years old, has amassed 1,361 points in the latest rankings as released by World Athletics, making him the fifth best pole vaulter in the world. He trails only Armand Duplantis of Sweden, Christopher Nilsen and Sam Kendricks of the United States, and Renaud Lavillenie of France.

A week later, on September 12 in Austria’s Gold Roof Challenge, Obiena finished in a new personal best of 5.93 metres, which also set a new national record and surpassed the Asian record set by Kazakhstan’s Igor Potapovich two decades before, at 5.92 metres.

Obiena was one of the 19 Filipino Olympians who took part in the 2020 Summer Games in Tokyo.

After easily passing the 5.55-meter barrier, he had difficulty with the 5.70-meter height, missing on his first two attempts. He had been sixth in the world before he failed to pass the 5.80-meter mark in the finals of the men’s pole vault at the Olympic Stadium in August.

Ernest John (EJ) Obiena began pole vaulting at the age of eight, after having first focused on hurdles. His father, Emerson Obiena, coached him until he turned 17.

Still, he tried pole vaulting again during his senior year of high school in the hopes of earning a college scholarship, and he once again fell short of the requirements for regional meets.

He also participated in competitions for the University Athletic Association of the Philippines, bringing recognition to the University of Santo Tomas (UAAP).

A year later, in spite of troubles with his broken pole, he won gold at the 2016 Philippine National Games Finals in Lingayen, Pangasinan, setting a new personal record of 5.47 metres.

Whether or not EJ Obiena will compete in the 2024 Olympics in Paris to improve on his previous results is still up in the air. In the finals of the men’s pole vault at the Tokyo Olympics, he tried three times and failed, therefore ending any hopes he had of winning gold.

In an interview given shortly after Obiena’s final leap, however, Philippine Athletics Track and Field Association (PATAFA) president Philip Juico stated, “We still have to talk about it. It’s important that we discuss his emotions following the Tokyo Olympics and his upcoming performance in Paris.

Obiena, according to Juico, would like to complete his degree at the University of Santo Tomas, where he has at least two more semesters. In his own words, “He still has to finish his academics, but we’ll talk about it.”

In addition, Obiena broke the national record in the men’s pole vault by clearing 5.76 metres at the 2019 Summer Universiade, where he won gold.

Although he finished 15th out of 35 competitors with a distance of 5.6 metres at the 2019 World Athletics Championships, he did not make it to the final round. In training, he plans to try to improve upon his previous best and jump at least 5.85 metres.

Presidential Communications Operations Office Secretary Martin Andanar remarked, “We and the whole Filipino people are very proud of the amazing performance that EJ Obiena has demonstrated in the Men’s Pole Vault Competition during the Tokyo 2020 Olympic Games.”